If you travel more than a mile to a supermarket, supercenter or large grocery store with affordable and healthy food options in an urban area, and more than 20 miles in a rural area, you live in what the U.S. Department of Agriculture considers the definition of a “food desert.”

This lack of access impacts roughly 17 million Americans, according to the USDA’s Food Access Research Atlas. The data also shows that the number of people who live a half mile or more from food options in urban areas, or 10 miles in rural areas, increases that figure to more than 53 million Americans, including those in New Jersey.

In January 2021, New Jersey Gov. Phil Murphy signed into law the Food Desert Relief Act, part of the Economic Recovery Act, which will provide about $240 million in funding to combat this issue in the state.

The Food Desert Relief Act provides tax breaks to supermarkets and grocery stores that open in under-served areas, as well as grants, loans and other assistance for food retailers of all sizes to operate in these areas.

The Community Food Bank of New Jersey estimates that 800,000 residents in the state are dealing with food insecurity, and almost 200,000 of them are children.

Robert Brown, 53, of Newark, New Jersey, says he makes a two-mile commute from his home to a ShopRite without a car, telling ABC News that pricing and options are a factor.

“I live like 20 blocks away, but we have a store downstairs, where I live at, but [prices are] so high, I come here,” Brown said. “There’s no need in spending my money there, and I’m getting a little bit of nothing when I can get everything I need.”

Katrina Moseley, 45, says she has to take it a step farther, as the two-mile journey to ShopRite is her second grocery shopping trip of the day.

“I started at 8 o’clock this morning, I went to Walmart, got back home like 11:30, rest for a little bit, caught the bus… I got here like 12 something, 12 or one something. Shopped. I take my time in the store to go through stuff, and now I’m waiting for transportation to go home,” she said.

Moseley depends on two different bus lines, taxis, and relatives to pick her up, as she spends her day off from work to feed her family of four, including a daughter with a baby on the way.

“I go to Walmart to get the bulk of the meat because it lasts, you can make like…One of their packets of meat you can make like 2-3 meals out of it, all depends on how you do it,” she said.

Tara Colton, the executive vice president for economic security for New Jersey’s Economic Development Authority, says that addressing food deserts, a product of structural racism, neighborhood redlining (the withholding of services from certain communities) and disinvestment, is not as simple as building a supermarket.

“You can live next door to the most amazing market or farmer’s market but if you can’t afford to buy the food that’s in there, or they don’t accept federal nutrition programs like snap, then its inaccessible to you,” Colton said.

The Economic Development Authority’s Sustain & Serve NJ initiative began as a $2 million pilot program to help with food security, in conjunction with supporting the state’s restaurant industry in 2020. The program has evolved into a $45 million initiative, paying restaurants to deliver ready-to-eat meals directly to those in need.

Colton told ABC News, “I often say it isn’t about bringing people to food, it’s about bringing food to people. And there’s a lot of ways to do that. They can go into a big building, and buy it put it into the truck of a car, but you can also bring it to them more centrally.”

She touts the program’s impact. “That one dollar you’re spending is keeping the restaurant open, the workers employed and is giving people who often can’t access this kind of food, a healthy fresh nutritious homemade meal,” she said.

For those like Moseley who prefer to cook their own meals, despite the miles-long odyssey to multiple supermarkets, the focus is on doing what’s necessary for her family.

“Those who I got to worry about, so this is what I do for them, shop. Getting it done, out of the way,” she said. 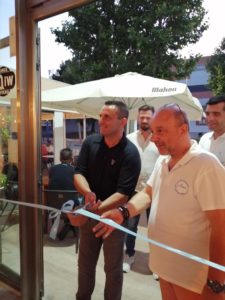