Over winter break, I was gifted a copy of “Dessert Person: Recipes and Guidance for Baking with Confidence,” a cookbook by the one and only Claire Saffitz. Like many others, I was first introduced to Saffitz through the Youtube series Gourmet Makes. In the show, Saffitz, a French-trained pastry chef, would be tasked with recreating a famous treat — think Twinkies, Hot Pockets, Twix, Ruffles — with a gourmet twist. Along with her dry humor and Type-A personality, Saffitz was also known for her ability to break down even the most complex recipes and reinterpret them in a modern way.

“Dessert Person” is the embodiment of Saffitz’s personality. The book itself has over 100 recipes, mostly desserts, with the exception of a savory baking section that has been given a modern twist. Each recipe is ranked on a scale of 1-5 for difficulty (1 being ‘very easy’ and 5 being ‘very difficult’), along with a time estimate, allergen notices and even a season category that takes into account the recipe’s seasonal produce.

As someone who loves to bake but is definitely not an expert, I was especially intrigued by the difficulty measures for each recipe. I thought it would be a fun idea to make one recipe for three out of the five difficulty levels (excluding level 1 because I wanted a challenge and excluding level 5 because they were too much of a challenge) and see, from a home baker’s perspective, if each recipe is as easy or difficult as the book claims. And of course, I wanted to see if the recipes tasted as good as they looked in the pictures. 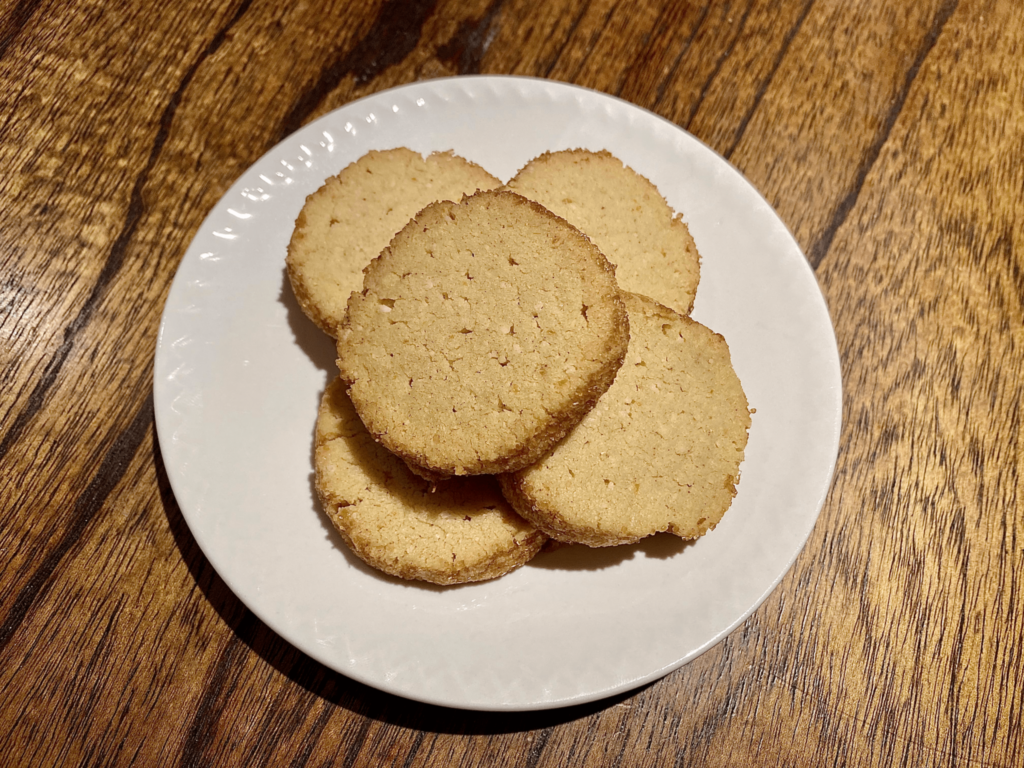 The first recipe I attempted was the Brown Butter and Sage Sablé Cookies. Labeled as a level 2 recipe, I felt pretty confident going into it, especially since most cookie recipes I’ve made are pretty straightforward.

However, my confidence quickly dwindled as I messed up on the very first step of the recipe, which was to make the sage brown butter. The recipe instructs to heat up two sticks of butter with four sprigs of sage in a small saucepan until it boils, and keep cooking until brown bits appear. I turned away from the stove for like a minute to measure out the dry ingredients and came back to a pot full of black liquid with a very bitter smell. Pro tip: Keep your eyes on your brown butter so it doesn’t burn and stink up your whole house. 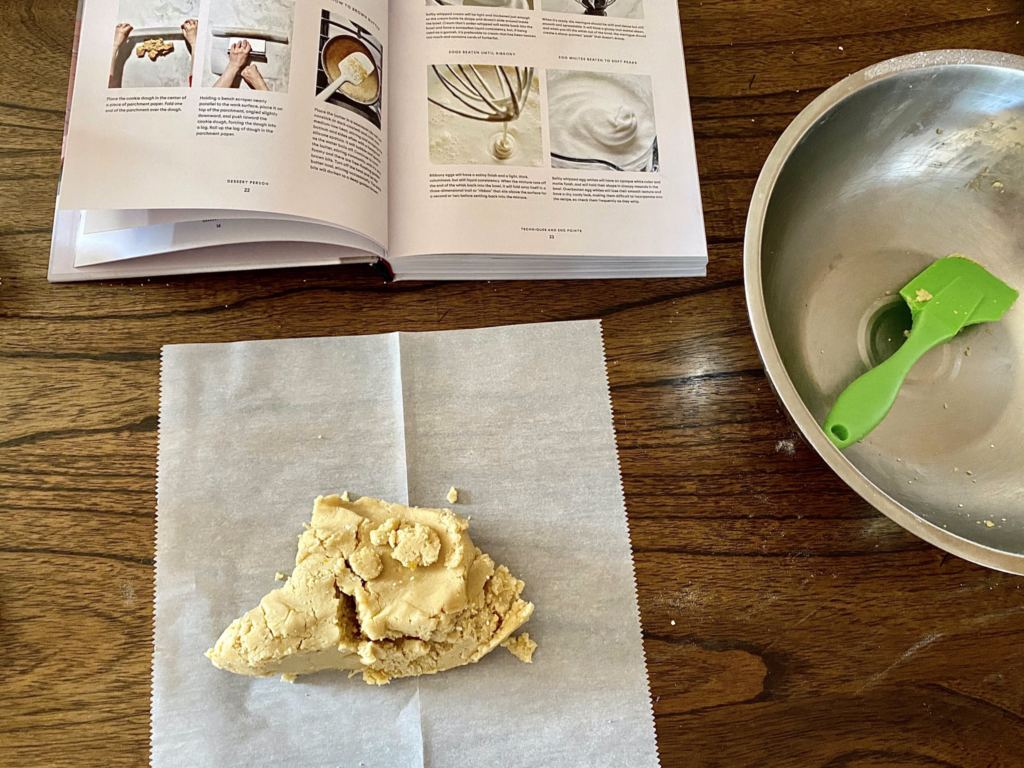 After the brown butter fiasco, the rest of the recipe went pretty smoothly. I creamed the brown butter with the sugar and combined it with the dry ingredients. The recipe called for cornstarch, but I didn’t have any so I subbed with sweet potato starch powder, which seemed to work fine. The most technical aspect of this recipe was forming the cookie dough into logs using parchment paper, in order to cut the cookies into uniform circles. However, the book gave a great step-by-step on how to form the logs, along with visuals, so this step ended up being easier than I expected. 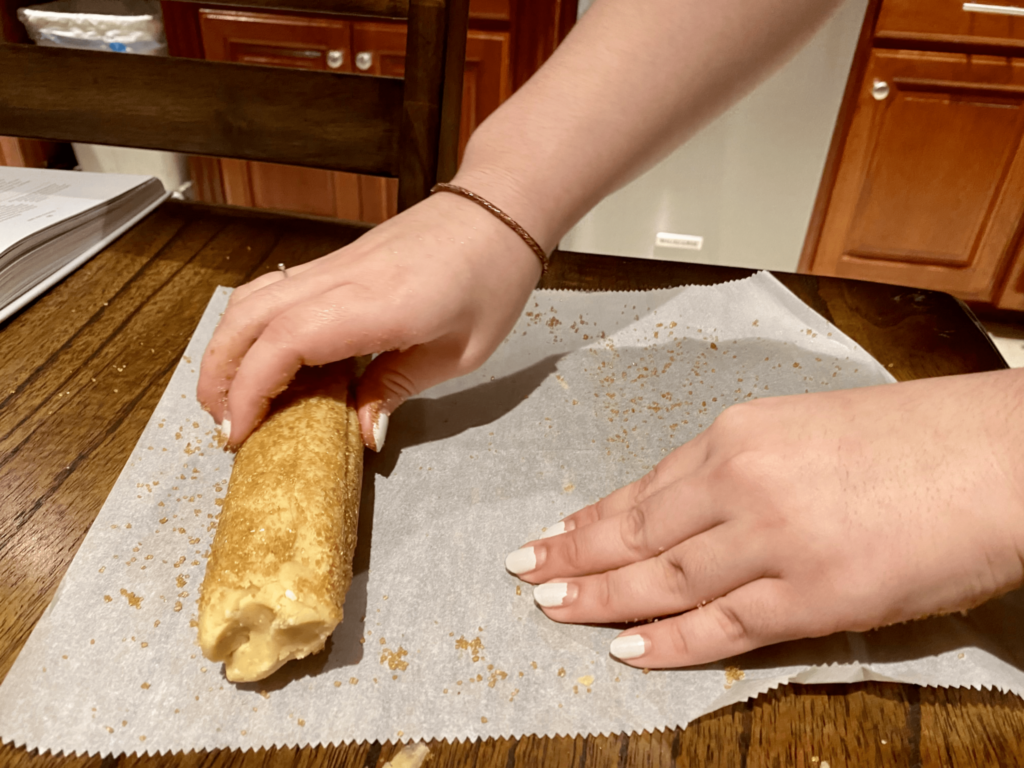 I followed the recipe’s instructions to chill the logs for at least two hours, rolled each log in turbinado sugar (recipe calls for demerara sugar, a coarser kind of raw sugar), cut them into half-inch slices and popped them into the oven. The book emphasizes that cook times “are suggestions, not dogma,” so I followed the recipe’s tip to take the cookies out when the edges are golden, which took around 18 minutes (out of the proposed 16-20 minutes).

My family and I ate the cookies straight out of the oven, and we were pleasantly surprised. I was a bit worried about incorporating such a strong flavor like sage, but it added a unique savoriness to the cookie that tasted so good with the nuttiness of the brown butter. The texture of the cookie was crunchy but light at the same time, crumbling in your mouth as soon as you bit into it.

I think the proposed difficulty level is accurate. Once I got the brown butter down, it was just a matter of combining wet and dry ingredients and forming the dough. Having to wait 2 hours for the dough to chill was a small inconvenience, but nothing major.

The sage really elevated the flavor of the cookie, and the cookie texture was amazing. I’m taking off half a point though because I think you really have to like sage to like this cookie. After eating it for a bit, the sage flavor does get a little overpowering. I’m curious to remake this recipe without the sage and see if it tastes even better. 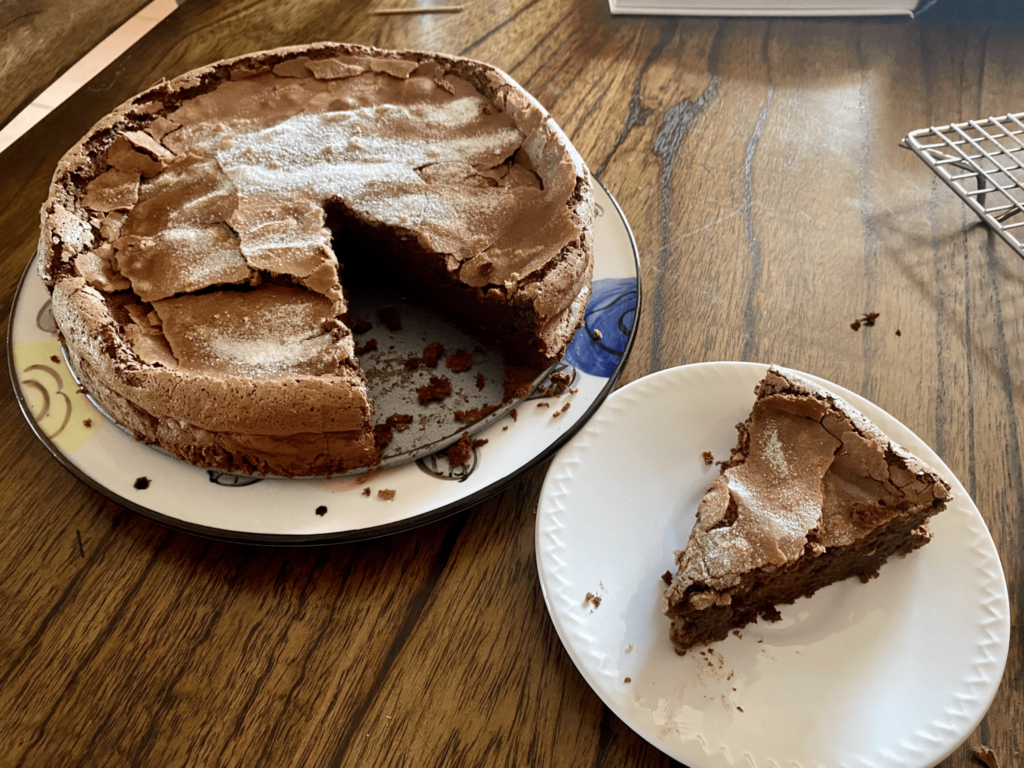 The following week, I decided to make the Flourless Chocolate Wave Cake, a lighter take on a traditional flourless chocolate cake. The cake has that wow-factor look, as the edges of the cake form a pretty wave pattern that I’ve never seen before in a cake.

Unlike the previous recipe, which didn’t require any special equipment, this recipe calls for a 9-inch springform pan. I considered just using a regular cake pan, but I ended up buying a springform pan because I didn’t want to risk ruining the wavy edges of the cake (a springform has removable sides so it’s easy to take the cake out of the pan).

After getting the appropriate equipment, I got started on the actual recipe. I melted the chocolate, oil, dark whiskey and water together over a double boiler, and combined it with an egg yolk and almond flour mixture.

To make the cake less dense than a traditional flourless chocolate cake, the recipe calls for meringue (whipped egg whites) to be added to the cake batter. Making the meringue was a whole other process, taking around 10 minutes of beating the egg whites to reach the desired level of stiffness and glossiness. At around the five-minute mark, I realized I probably should have used a bigger bowl. 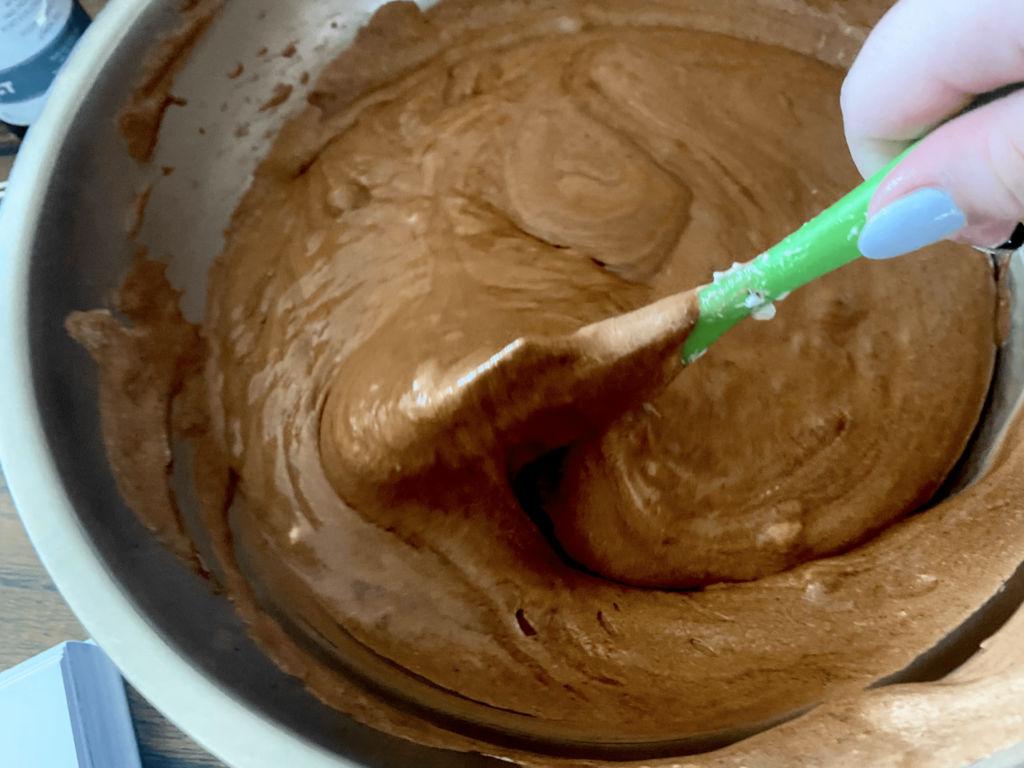 Once the meringue was done, I carefully folded it into the almond-flour batter, poured the whole mixture into the springform pan, and sprinkled the top with white sugar. In the oven, the cake rose dramatically, almost like a souffle, which was pretty cool to see. After it was out of the oven and cooled down, the cake sank down and formed the wave pattern around the edges — just like in the picture!

The cake itself was just like how I imagined it to be. It had a deep chocolate flavor and soft, mousse-like texture that reminded me of a Japanese-style cheesecake. It was also on the less sweet side, unlike other flourless chocolate cakes I’ve tried.

While the book rates this recipe a 3 out of 5 in difficulty, I honestly think it was just as easy to make as the sablé cookies. Making the meringue was the most time-consuming element of this recipe, but the book gave very clear instructions on how to make it and how to tell when your meringue is ready.

This cake was definitely good, but there wasn’t anything mind-blowing or special about it aside from the wavy edges. Taking away the visual appeal though, the cake tastes like a standard chocolate cake, just a little more fluffy and less sweet. I’m not sure if I’d make it again for fun, but I’d eat it again if someone else made it for me. 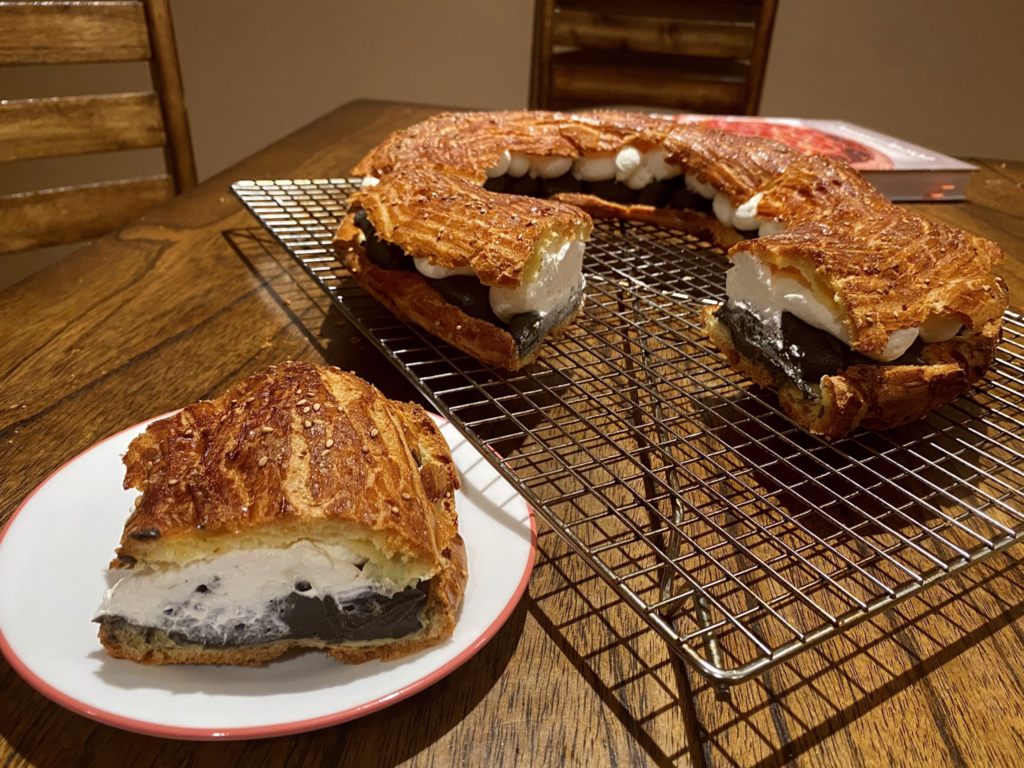 For the third and final recipe, I decided to try making the Black Sesame Paris-Brest. Black sesame is a flavor I grew up eating in Asian desserts, so I was curious to see how it would taste in the form of a Paris Brest, a classic French pastry named after the famous Paris-Brest bicycle race.

There are three parts to making this recipe, the first being to make the black sesame pastry cream, which is a separate recipe in the book. I’ve never made pastry cream before, so I was surprised by how technical the whole process is, like having to temper the egg yolk mixture before adding it to the pot of milk and heating the mixture just enough to activate the cornstarch, but not too much so as to burn pastry cream. 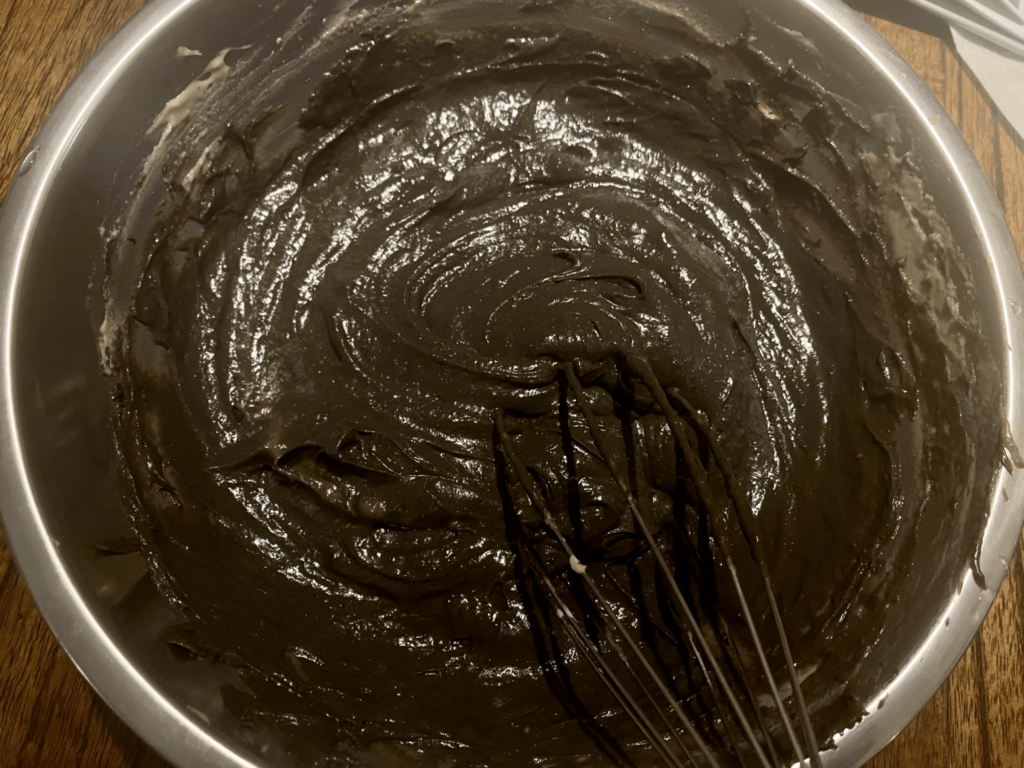 I fully expected myself to mess up in some way, but the pastry cream actually turned out delicious! I tasted the cream on its own before adding the black tahini (black sesame paste), and it was so creamy and custardy that I almost didn’t want to add the tahini for fear of ruining it.

I added it though for the sake of the recipe and popped the pastry cream into the fridge to chill for four hours. 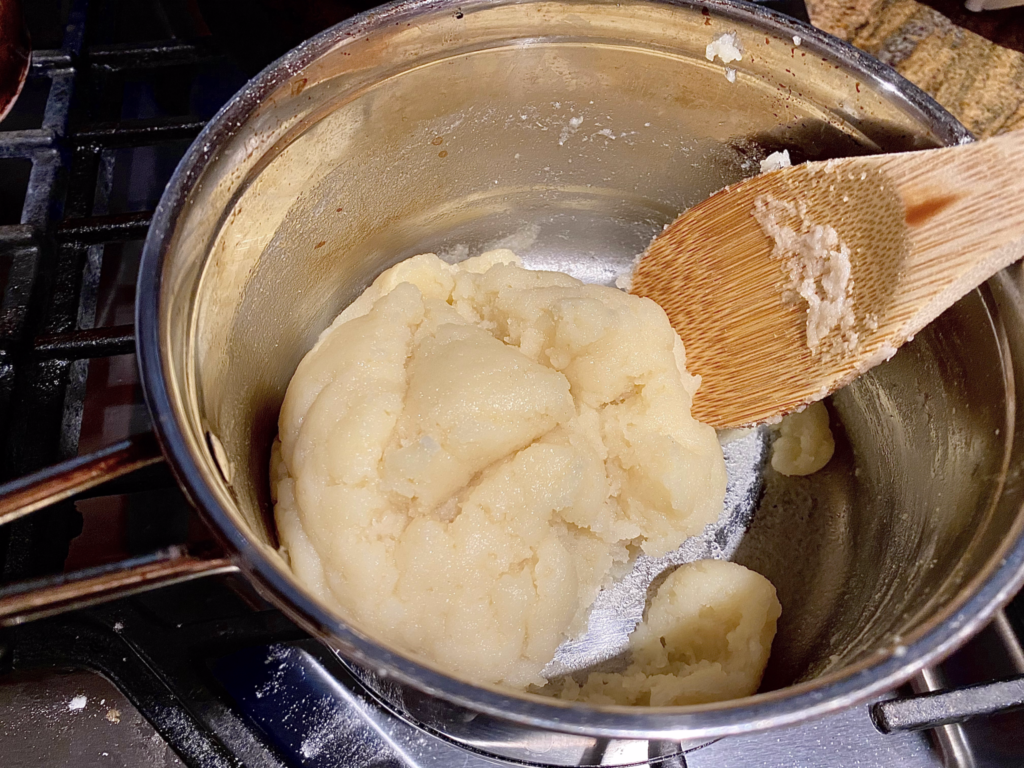 About an hour before the pastry cream was ready, I started the next part of the recipe, which was to make the pâte à choux for the pastry shell. Making the pâte à choux was the part I was most nervous about because I’ve tried making it before to make cream puffs, and it was a complete fail — the cream puffs did not puff up at all.

What’s unique about a pâte à choux dough is that you precook the dough on the stove and add in a bunch of eggs afterward (this recipe called for five) so that the dough puffs up in the oven. The recipe states to keep cooking the dough until a light film forms on the bottom and sides of the pan.

After taking the dough off the stove, I transferred it into my family’s super old stand mixer (I think it’s literally older than me) and beat in five eggs, one at a time, until the paddle, when pulled up, forms a V-shaped dough trail. I then piped the dough into three overlapping circles to form the ring. 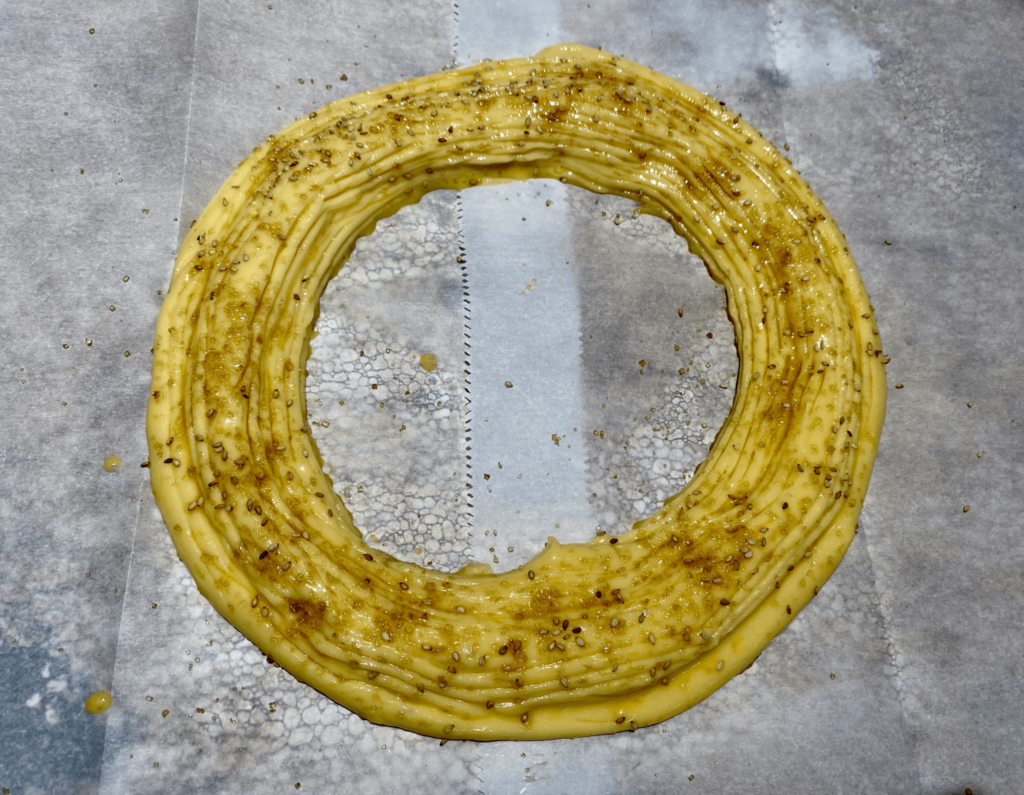 I brushed on the egg wash and sprinkled on turbinado sugar and white sesame seeds (didn’t have black sesame seeds, oops) and put it in the oven. Baking the pâte à choux was a task in and of itself because you have to lower the oven temperature after 10 minutes, monitor the pastry so that it dries out enough but doesn’t overcook and let the pastry cool with the oven door propped open so that it doesn’t crack.

My pâte à choux ring ended up being a mixed-success — part of it puffed up, but other parts stayed pretty flat. I have a feeling it might be because of the uneven temperature in my oven but who knows. 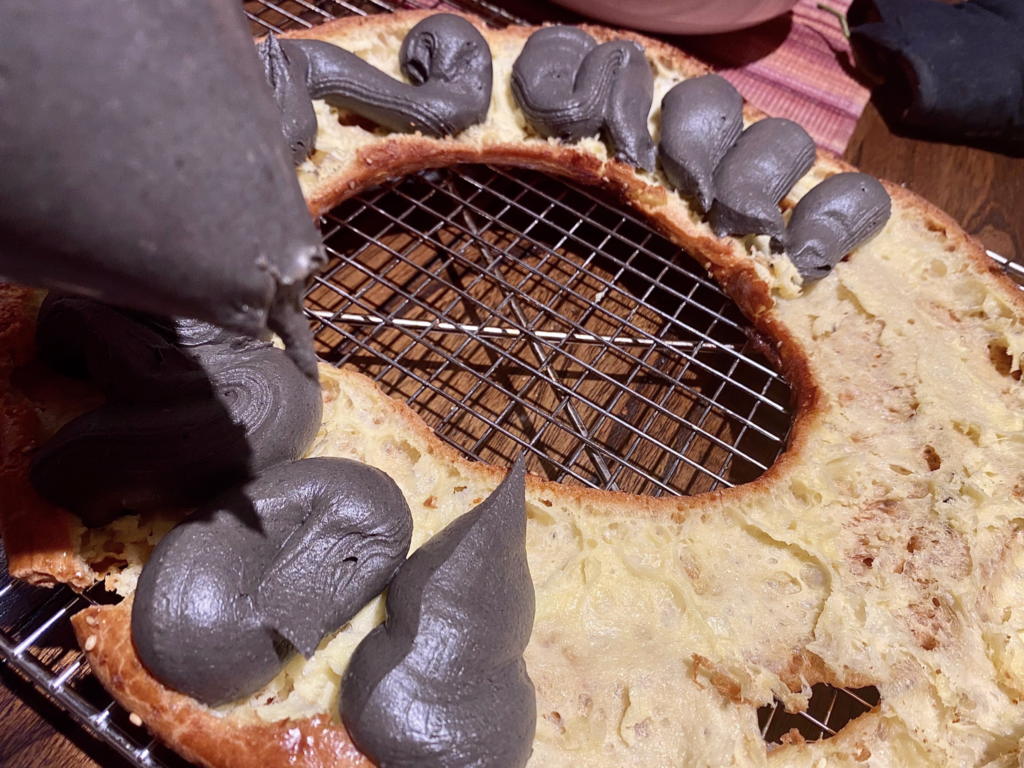 Once cooled, I cut off the top of the ring and piped in the black sesame pastry cream and whipped cream, which I made while the pâte à choux was baking. Because the pastry was flatter than expected, the final product didn’t turn out exactly like the picture in the book, but I think it came pretty close.

This recipe was definitely a challenge to make, mostly because there were so many technical components and a lot of observation and waiting involved. I think the pâte à choux alone adds another point of difficulty to this recipe.

Even though this recipe was by far the hardest to make, I would definitely make it again for a special occasion or just a treat for myself because it was just that good. The pâte à choux dough was the perfect blank canvas for the sweet whipped cream and black sesame pastry cream, which was the real star of the dish.

Overall, “Dessert Person” is a cookbook that has recipes for bakers of all levels. I would especially recommend this book for people who want to spice up their desserts while still eating something familiar to them.

Sun Feb 7 , 2021
If you have 1 working day… So you are organised, but not that organised. But hey, 1 day is far better than no working day! These desserts can be produced the day prior to, so you can be super calm arrive time to provide up!  Passionfruit ricotta with honey and […]